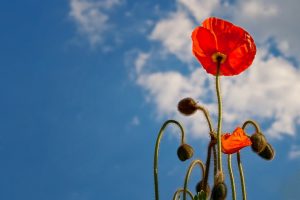 The poppy is a symbol of courage, hope and remembrance!

In Flanders Fields, the poppies blow

Between the crosses, row on row,

That mark our place; and in the sky.

Scarcely heard amid the guns below.

We are the dead, short days ago,

Loved and were loved, and now we lie,

Take up our quarrel with the foe:

To you from failing hands we throw,

The torch; be yours to hold it high.

If ye break faith with us who die,

We shall not sleep, though poppies grow,

The most commonly held belief is that Colonel John McCrae wrote “In Flanders Fields” on May 3, 1915.  It is said to have been written on the day after presiding over the funeral and burial of his friend Lieutenant Alexis Helmer, who had been killed during the Second Battle of Ypres.  (pronounced ee-prah)

It is also believed that the poem was written as John sat upon the back of a medical field ambulance near an advance dressing post at Essex Farm, just north of Ypres.

Due to the tremendous disturbance of the earth from cannon shells and the nitrogen from them, the poppies exceeded normal presence in those fields for several more years.

Poppies are a show of support for the Armed Forces community, for those currently serving, past-serving military personnel and their families.

The poppy flower is a symbol of remembrance for all those who have fallen in military conflict. In addition, the poppy signifies hope for a positive future and a peaceful world.

*Type “Flanders Fields” in your browser for more interesting information about World War One and Flanders Fields in the country of Belgium.

And in remembrance, may we all work to resist the insanity of war so that peace between nations of the world may one day be achieved. If half of the mothers in the world would write a stop the insanity of war to the United Nations and major country leaders, maybe we’d have a chance for world peace. Wouldn’t hurt to try, eh? Thank You. Blooming Bobville, the positive response practical poet for the common good.